How to open your own nonprofit coworking space in France

By Claire TrevienApril 11, 2019No Comments

Earlier this month, Morgane d’Amphernet of Red Velvet and I opened the doors to a new coworking space in Quimper, France. It’s called l’Atelier Corail which translates as The Coral Workshop. It consists of two small office spaces, an open space landing, and a large space downstairs that can be rented for events and meetings, with an open kitchen.

Why create a coworking space?

Under the French system we are both auto-entrepreneuse, which is the simplest system for freelancers here. We were both in need of office space in Quimper. Morgane needed somewhere where she could meet her clients.  I wanted somewhere more practical than a café to work in, as well as space to run workshops and events when needed. We met through a Facebook group for women entrepreneurs in Brittany (Entreprendre au Féminin Bretagne), scheduled a coffee, and went to visit the space we would eventually rent. In the space of a day we had met each other, had our ideal venue in mind, and the wheels were churning around in our brain as to how to make it happen.

Rules and regulations in France are a little bit of a headache, so it took us a while to agree on the best way to do this. We each had our freelance work keeping us busy already and weren’t looking at this space as a money-making venture but rather as an affordable space where we could meet other freelancers and create a little community. We settled on opening up an Association Loi 1901 as the right structure for the space.

France has millions of non-profit associations for all sorts of things, for tennis clubs, or feeding refugees. As a child, I was involved in my mother’s association which was set up to run an international dance summer school, so it felt safely familiar. The other advantage is that if this venture ends up working *too well*, it’s fairly straightforward, in French terms, to upgrade it to a different status.

L’Atelier Corail: What’s in a Name?

We’ve been asked a few times how we came up with that name. The truth is, it was inspired by the exterior walls of the building we chose, which is washed in a pale rusty-coral colour. Morgane works as an image consultant and pointed out that Pantone’s colour of the year is ‘Living Coral’. Orange also happens to be the colour of communication. I was drawn to the colour because it made me think of an ecosystem that keeps the world its in healthy. We picked ‘atelier’ because it felt less stuffy than the alternatives: ‘space’ ‘office’ etc. What did we use to make l’Atelier Corail happen?

I really didn’t want to miss out on the space we had seen because to me it had everything: charm, great location, the right amount of space, well renovated already, and reasonable rent. So it was vital to move fast so that we could get the paperwork started.

I decided to take a shortcut to creating the association and used LegalStart. For a fee of 181 euros (-20% if you use them through this link) they took care of everything for us, and in record time too. We had all the official papers required within a fortnight. You can of course do this yourself for free, if you have the time and patience. The only cost after that is 44 euros for the notice of creation in the Journal Officiel.

Two other imperatives before opening were to also have a bank account and insurance. We ended up going with the CIC and MAIF respectively as we found them to be the most receptive to our project. They really *got* what we were trying to do.

Thanks to those three, we were able to sign a lease on 5th March. Bearing in mind Morgane and I had first met on 12th February, this was pretty damn fast!

The last thing worth mentioning is that we are currently using Cobot.me as our booking system for L’Atelier Corail. It was quite a steep learning curve, and not all of it is translated into French yet, but now that it’s up and running I’m very pleased with it. We’re still in the trial period, but we will be signing up, and hoping that they give us the non-profit discount they mention in their literature ?

Where did you get the furniture? 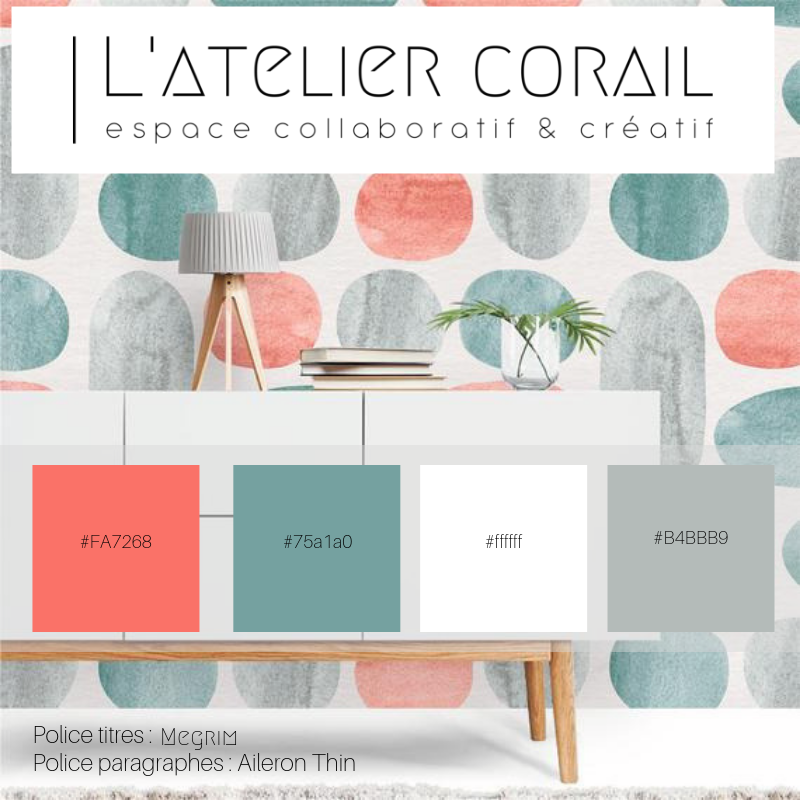 I used this image as a guide for our design choices

Morgane and I have different but compatible tastes so we set up a private Pinterest board. It enabled us to share our ideas for work set ups, colour schemes, and storage solutions. This was a really helpful thing to do as we then felt confident in our vision as we rummaged through various second-hand shops such Emmaus, Treuzkemm, La Trocante, as well as the inevitable Le Bon Coin and Facebook Marketplace. 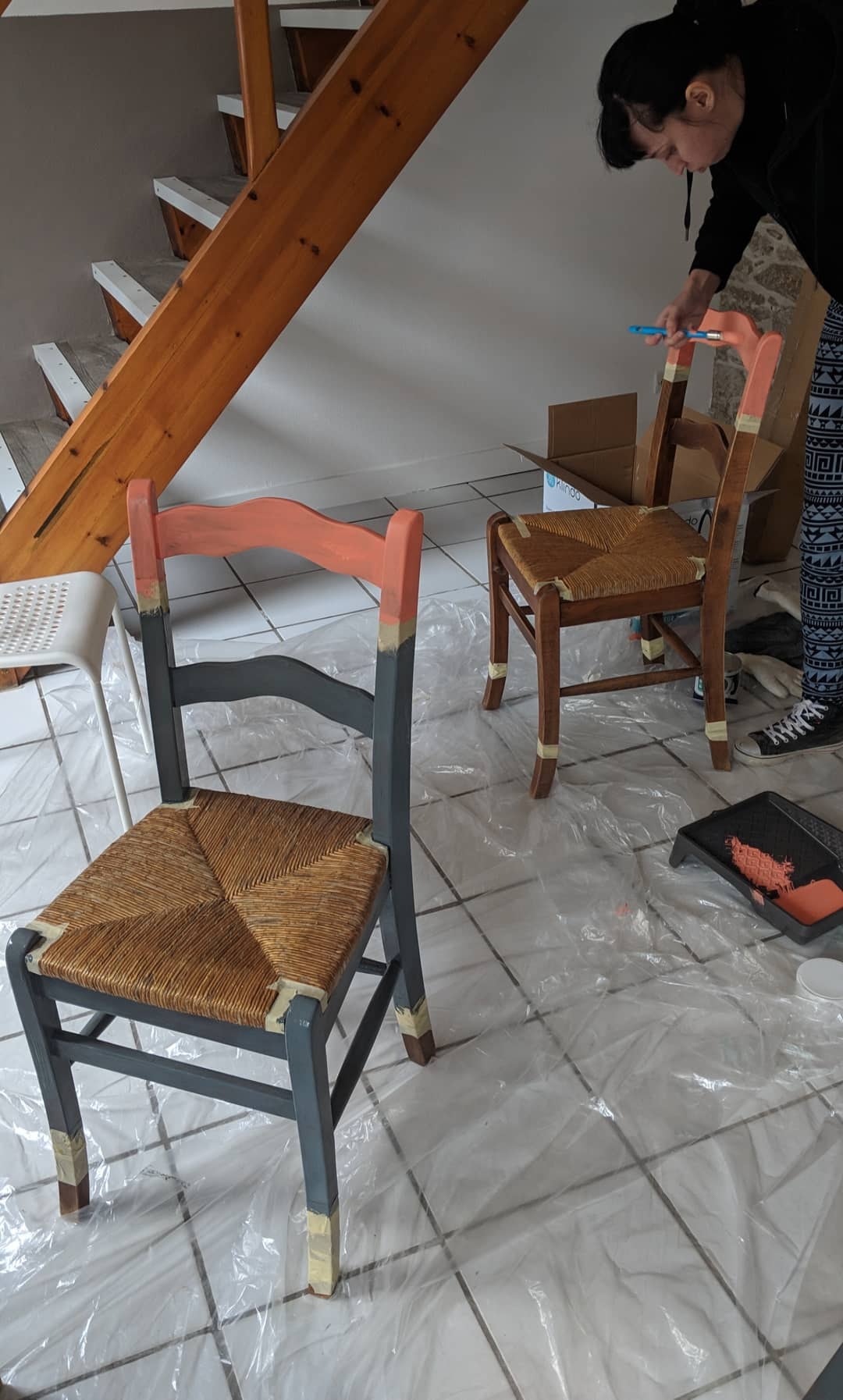 We tried to keep our expenses down as much as possible, telling ourselves that we could always upgrade items later once the association has some savings. We repainted my grandmother’s dining table, spray painted table legs in bronze, changed the handles of the kitchen cabinets, and so on and so forth. Morgane had to eventually pry the spray can out of my cold dead hands.

The most expensive items were probably the two sofas, the jonc-de-mer (seagrass) floor we bought to cover up the floor tiles, and the rollable screens we bought to divide the room when needed. These were all new. We also found some good bulk deals on Scandinavian chairs and stools on Sklum and Groupon and decided they were worth the expense. 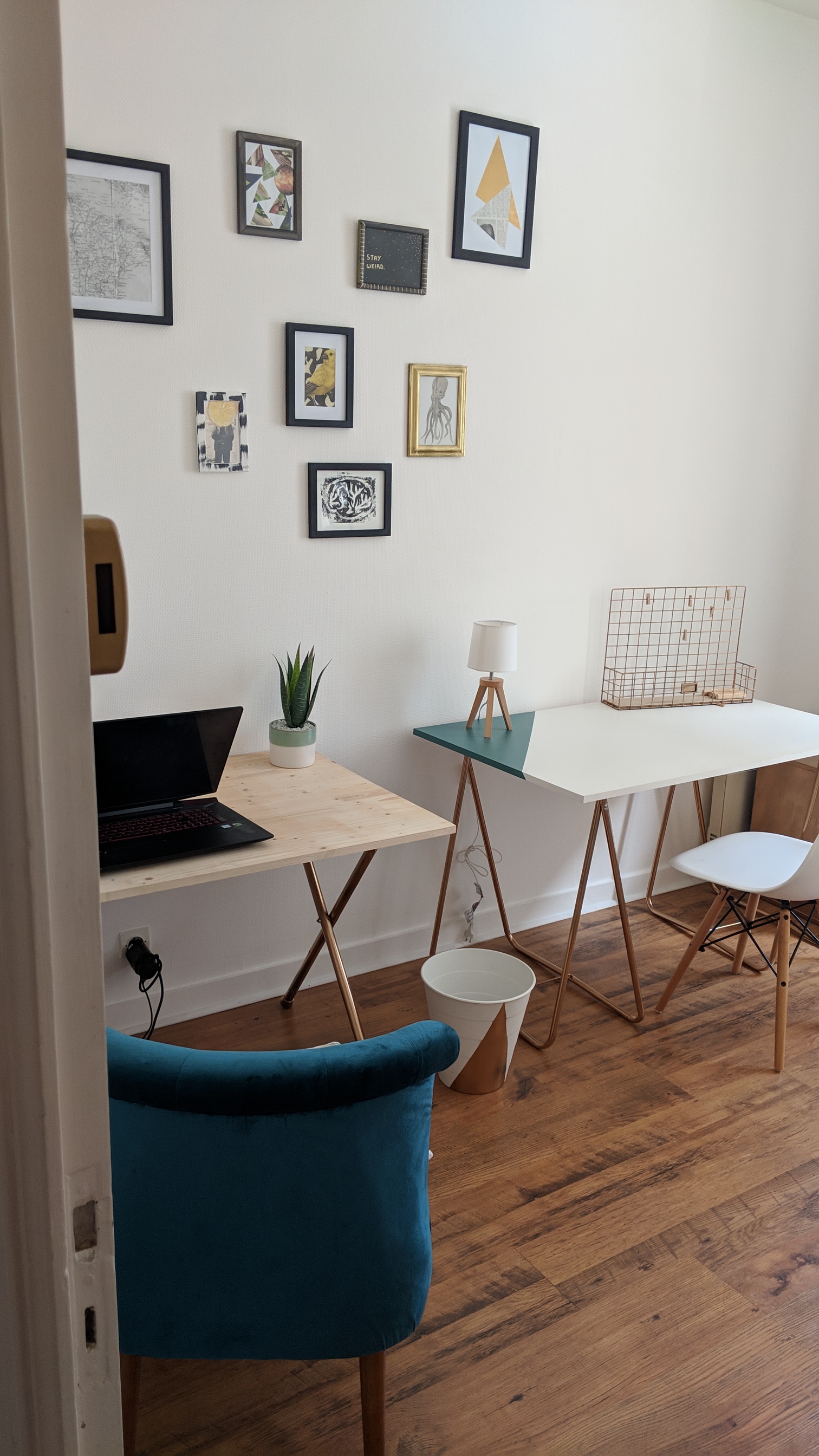 We’ve only been open for a fortnight and it’s going ok so far! We’ve loved having people over to work here and have also been using it ourselves to get our work done. I’ve found it way more productive than my home office (where work can get easily interrupted by a smother of cats). My brain is buzzing to the brim with ideas for events.

We’re also having a party next Wednesday if you want to come and check out the space? Link here.

I hope you’ll come and visit us when you’re next in the area. Whether you’re on holiday and looking for a place to get some quick work done, or a digital nomad in search of a community, or someone who lives in the area and is fed up of only have cats for colleagues.